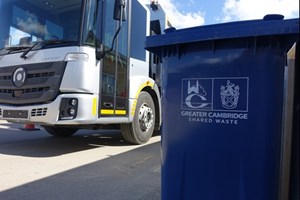 As part of a wider transformation programme, Cambridge City and South Cambridgeshire decided to bring together their existing IT systems - including the in-cab technology used by their fleet of bin lorries - to improve their waste management service.

In line with the councils’ ‘digital by default’ drive, the aim was to create a seamless end-to-end service, enable residents to self-serve, deliver a better service for citizens and the councils whilst making the best use of technology and reducing inefficiencies.

With the new service, residents would be able to go online to report missed bins, or request new ones, rather than contacting the customer services team by phone. For citizens to receive a response to queries in real time, integration between the online self-service and the back-office system and in-cab technology was essential. As well as this, a new online calendar was developed to provide interactive information on their next waste collection dates.

Rebecca Weymouth-Wood, waste policy manager for the Greater Cambridge Waste Service, explains: “We wanted to rethink how we delivered our waste services across the two districts to make them more efficient and responsive. This included enabling residents to self-serve at any time of the day or night and we wanted one solution to manage the district councils’ collection rounds with a back office to match it – our borders were going to disappear!” 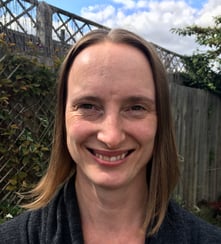 The project was managed internally by Weymouth-Wood and Tony Allen, senior project manager for 3C ICT, the shared ICT service between Cambridge, Huntingdonshire and South Cambridgeshire councils. Together they worked with IEG4 to introduce the new online bin forms using eDesigner to build them. From the outset, Allen was clear that the success of the forms depended upon his team and IEG4 working closely with the service team, led by Weymouth-Wood.

“We wanted to replace the conversation a resident would have with a customer advisor regarding a missed bin collection, for example and distil it into an online ‘conversation’. So, we needed to understand the councils’ waste collection policy inside out - collection days, types of bins, size of bins, colour of bins and the terminology that residents understand and use.

“Through regular meetings, taking an iterative approach, we were able to develop the forms exactly how we wanted them before going live,” Allen says.

User testing was done by Weymouth-Wood’s team, customer service advisors and then other council departments to ensure the forms were ‘ticking all the boxes and doing all the desired permeations'.

“We spent hours and hours testing the forms to make sure all angles were covered. The time we spent paid off. We had a successful launch and only had minor tweaks to do once the forms went live,” Weymouth-Wood says.

Cambridge City and South Cambridgeshire district councils provide refuse and recycling services to nearly 120,000 homes. Like most councils, they received a high volume of calls regarding bins which represented one of their highest volumes of calls.

The new system went live in July 2018 and in the first ten months of going live, the team received 4,500 fewer calls as residents turned to self-serve.

The introduction of the new service has brought financial savings to the council from reduction in calls and means customer service advisors have more time to deal with complex cases or help those residents who can’t or don’t want to use the online service.

“We are also getting lots of compliments about the new calendar which people are finding easy to use and informative,” says Weymouth-Wood.

She explains that establishing whether a bin had truly been missed by the council or that the resident had forgotten to put it out was always a challenge. However, with the in-cab tracking system and the online forms integrating with the back office, residents have up-to-date information in real time.

This functionality was made possible by IEG4 working closely with Connected Asset Management Software and Service provider, Yotta. Gary Woodcock, Director of Sales and Alliances at Yotta says: "Working in partnership with IEG4 enables open APIs to seamlessly integrate, allowing direct communication with the in-cab technology which results in 2Cs delivering an end to end, joined up user experience to their citizens in a service area with high volume demands."

The new service, says Weymouth-Wood, has removed all the uncertainty, as now the resident has an instant response from the web form if the bin has been put out at the wrong time or on the wrong day.

"This led to a small number of complaints in the beginning as residents were surprised that we were being so firm with our missed bins policy. But, it’s all about changing the way citizens interact with the council and for them to understand what we do and what their responsibilities are too."

A key driver for the project was to streamline the service overall – creating one main system and one form across both councils.

Allen says: “This has led to improvements in service and efficiency in the operation of the back office. Previously, for example, when we needed to change information on the in-cab devices, this had to be done manually across the systems and could take weeks.

“Now these changes are immediate and go straightaway into the one system across the two districts. We are also doing fewer missed bin collections, so these new ways of working are saving time and making us look how we can reconfigure collection rounds.”

But this isn’t the end of the digital journey.

Cambridge City and South Cambridgeshire both use IEG4’s OneVu Customer Engagement System and plan to include the bin request services and bin calendar into the citizen portal. They can also track payments, notify the council of changes from their phone, laptop or tablet device.

In addition, the councils are currently looking at developing eforms for residents who apply for assisted bin collections. These will be built in-house using IEG4’s eDesigner and, like the other forms, will integrate into the back-office system. The move follows the expansion of the service reporting a missed bin to include flats, which amount to 25 per cent of homes in Cambridge.

Allen concludes that “due to financial pressure and the desire to provide the best service possible, we will continue to develop and improve the service we provide for residents including the opportunities to self-serve. This is the start of our journey and not the end.”

If you’d like to find out how IEG4 can help to improve and deliver your digital transformation needs, we are running a rolling programme of webinars. Visit our events page to discover more: https://www.ieg4.com/events

Stay in the loop

We don’t want you to miss out.

Sharing our thoughts, insights, experience and knowledge is what we do and we want you to be part of it.  We also want to hear what you have to share.

Through our insights we hope to:

Enabling digital transformation that is simply effective for everyone